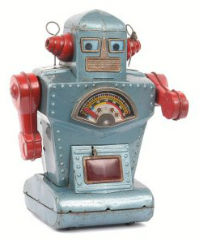 Founded in the 1950’s, the company Yonezawa Toys was one of the largest toy manufacturers in Japan during the post-war era. Yonezawa produced thousands of small tin mechanical and battery powered toys until the early ’70s. Their robot toys are known for doing more than just walking. For example, the “Winky” robot walks as its arm swings and a red pointer on its chest meter sweeps back and forth while sparkling action lights up behind its translucent red mouth cover. On the left is the “Diamond Planet” robot produced by Yonezawa in 1960. A seller auctioned off his rare valuable tin robot for a top bid close to $18,000 to an enthusiastic toy collector! This robot features several actions such as being propelled by a key-wind motor, moving chest dial pointer, sparkling red window, and jiggling eye pupils which all give it a comedic personality to the robot. If you are search for a classic Yonezawa toy, take a look at some items that are currently up for bid by sellers online.