If you grew up in the ’80s, you’ll probably remember the classic robot cartoon action series, The Transformers, that ignited the toy robot craze in the United States that fueled the toy and children television industry during that time period. Robot action figures were already popular in Japan, but these toys didn’t capture the attention of American children until hit animation shows such as Transformers, Go Bots, and Robotech premiered on television during the Eighties.  Through the huge success of these animated shows among children, the popularity of these robot toys were instantly transported across the Pacific into the United States. The popularity of The Transformers still survive as a new movie franchise, inspiring a new generation series of Transformer toys. 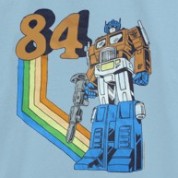 However, some of the valuable original Transformer toys are being found in old toy boxes and they are being sold to collectors online.  Now you have a chance to relive your childhood by collecting original vintage Transformers action figures, known as Generation 1, and add them to your growing toy collection with memorable characters such as Megatron, Optimus Prime, Bumblebee, Jazz, and Starscream.

If you love the American version of the Transformers, you also want to take a look at these original Japanese Transformers which are also available for sale online. Make sure to read the details for further information on these action figure toys from Japan.

For more interesting trivia and comprehensive history of the original Transformers action figure robot toys, watch the following video history on these toys leading to their resurrection in popularity by the success of its theatrical movies.