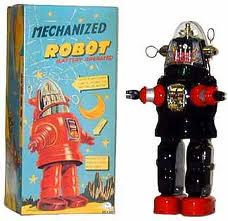 Nostalgic movie buffs of classic sci-fi cinema will fondly remember Robby the Robot as the iconic mechanical character from the 1956 science fiction movie, Forbidden Planet, starring Leslie Nielsen. Robby was originally designed by a Japanese-American engineer Robert Kinoshita and the robot was built for about $125,000 inside an MGM prop department in 1955 for his first movie. The popularity of the film and its high tech robot inspired a series of toy lines during the 1950’s and 1960’s. The original Robby the Robot toys were produced by Japanese toy company Nomura. The battery-powered mechanical toy walked on moving legs with parts moving and lighting up inside the helmet. The robot actually walked in circles, not in a straight line.  The pistons inside the dome are moved by rubber bands. They operated on either C or D cell batteries. If you are feeling nostalgic, the holiday season is a great time to buy one of these robots for a robot collector.

The Robby the Robot toys were later replicated and reproduced in limited edition by Masudaya and Osaka Toy Institute. If you didn’t find the toys you are looking for, try our links to search for other manufacturers of robot toys listed below.