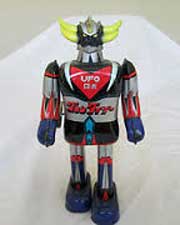 During the early 1970’s, the Japanese toy company Bandai created a toy division called Popy. Although they initially made tin toys such as the Grendizer robot photographed on the left, Popy began to incorporate die-cast metal into their action figure robot toys to reduce production costs during the ’70s.  The metal was zinc-based and became referred to as “Chogokin” which translates into the super metal alloy.  In the late Seventies, Popy exported the Shogun Warriors toy line to the United States.  Mattel distributed these Chogokin super robots under their own brand and packaging.  During the mid-Eighties (1984 – 1986), Popy re-released their deluxe version of their robot toys under their brand name “Godaikin” which were basically the same as their Japanese toy counterparts, except for their new American packaging for English speaking toy collectors in the USA.

Popy’s Japanese toyline of robot action figures is very popular with toy collectors so take a look at some classic brand robot toys on sale.